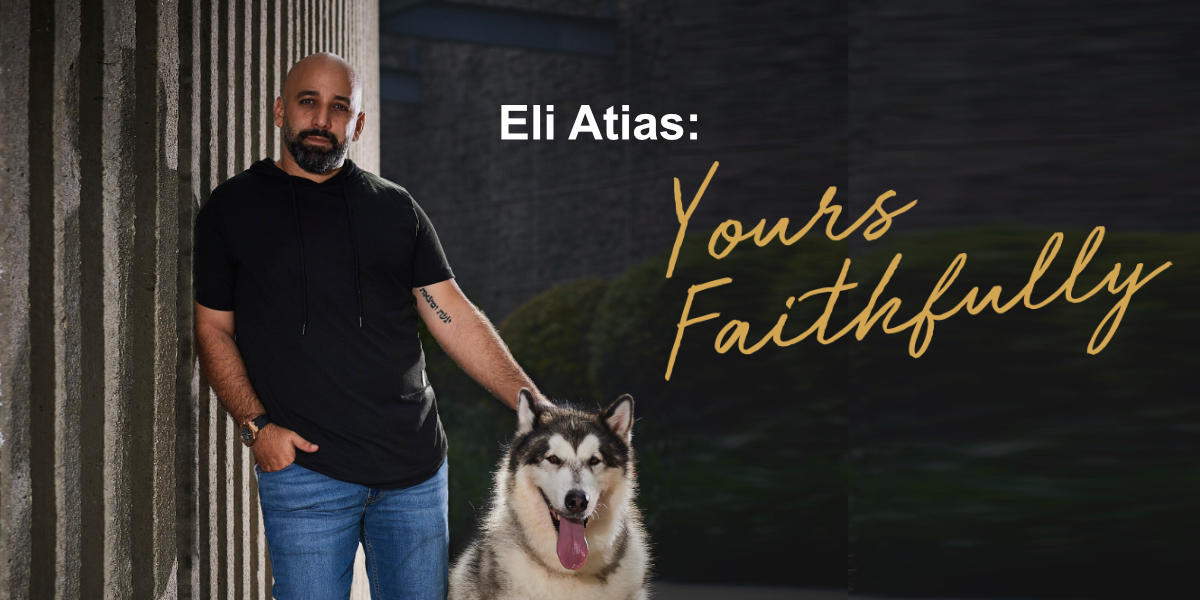 Taking the dog for a leisurely walk in the park turns into one of frustration when man’s best friend turns a deaf ear to frantic calls of “Come!” by its owners.

Nothing unfamiliar, it’s just an altogether typical everyday scenario. But for the 38-year-old Israeli, Eli Atias, it is a disconcerting moment.

As a veteran K9 dog trainer in military and security forces around the world, he understands that while its owner wants of the dog, the dog doesn’t quite understand what is expected of him.

The communication breakdown produces only frustrations and hand-waving despondency from the human tugging at the other end of the leash.

Such a scene produced that light-bulb moment for Eli. He knew he could fix it readily and quickly, but faced with work commitments; it was pushed to the back-burners – for another day.

The Voice Of Authority

“When life gives you lemons, make lemonade,” says the affable Eli. In this age of isolation, where travel is reduced to mere daydreams,  he now had time to address the scenario mentioned.

Where once he had written instruction manuals for the “GI-Joes” and their K9 dog units around the world, yes he surely, he could write a training book for your average Joes’.

He had previously developed the Special Operations K9 training modules; he knew this was somewhat different. The book had to address a rather fundamental problem: It was not a question of disobedience, but clearly, man’s best friend did not understand the instructions verbalised by their owners. It was a communication problem.

Pouring his 20 plus years of experience working with Military and Police dogs, including Project Instructor for various government agencies, he produced what is probably Singapore’s first dog-training handbook for the layman.

On making lemonade, he says: “I sit every night to write about the basics. I do think that it’s our obligation to train the dog to follow basic commands.” He figured only six basic commands were required to get things headed in the right direction.

In addition, from the onset of the project, he decided that a percentage of the proceeds from sales of the book would be given back to the animal welfare community here in Singapore. It was logical.

After all, his entire life so far had revolved around animals, and they offered him much joy and brought him to the far-flung reaches of the world. It was time to give back.

“Yes, You Can Train Your Dog” was published in August, some four months after he opened his laptop and got going. It was not much of an option really, given the Covid-19 stay-home-and-get-depressed situation or start hammering at the keyboard.

Eli’s very much like that – he sees optimism all around. He doesn’t see defeat in the face of reality, only a myriad of possibilities and a whole range of opportunities ahead.

Best Of Both Worlds

Growing up in a “moshav” (a cooperative agricultural settlement in Israel), gave a very young Eli the picture-perfect backdrop where animals formed his constant companions.

His parents were farmers in Gizo, located on the mountain of Jerusalem and he was the second of four boys. “From a young age, we have animals around you all the time,” he says.

An understanding of the behaviour and natural instincts of horses, dogs, cows and sheep formed the tentative basis of his future development.

Much like in Singapore, national military service is mandatory in Israel. There at 18, he found he could be attached to the army’s K9 unit: “It all came together, I can be with the animals and serve the country. I loved it!”

After his service stint, Eli had the opportunity to continue his love affair with the dogs. He worked on various Israeli government projects, including training explosive detection dogs for work in the public transport sector.

Thereafter, a chance encounter with Mr Arnold, owner of the Police Dog Centre in Holland, put him front and centre of the world map. An appreciative Eli says: “He gave me the opportunity to work directly with him and train ‘green’ dogs for deployment in various police and military arenas.”

In Europe, he took on the role of Chief Instructor for detection and narcotics dogs; after that, he went on to train dogs for the detection of explosives and land mines missions in Iraq and Afghanistan.

In South America, Eli saw the development of the K9 Unit for law enforcement and special operations against drug trafficking.

After spending more than two years in Europe followed by several months in Argentina and South America, a phone call from Tomer Avnon of the Avnon Group brought him to the shores of the little red dot.

The Avnon group which operates in over 60 countries, is a provider of turnkey solutions and technologies for governments, homeland security agencies, law enforcement and special units in the defence and safety sectors.

Working on the project for the military in Singapore, Eli says: “It exposed me to Asia, the culture, it’s people and their interaction with dogs.”

Upon his return to Israel after his initial stint,  Eli found an inexplicable hankering to return to Singapore. He felt restless and needless to say, he heeded the call and “since then, I have been relocated here, and have been travelling for various projects in the South-east Asian region.”

He first touched base with Singapore at the age of 24, now, “after 14 years doing different projects around the world, I have come to call Singapore home.”

He works as the CEO of CSF Ventures, an incubation company for cybersecurity solutions with operations in both Singapore and Israel. He heads the group’s Asia operation and business development in the security technology industry.

In this area, Singapore serves him well as it acts as a springboard to the rest of Asia. He adds: “The country operates western style, but with a unique Asian touch.”

When his work schedule was upended, rather unceremoniously, by the pandemic, the book moved to the top of his Things-To-Do list.

He notes: “The culture of dog ownership is becoming increasingly larger. People here truly love their dogs, and they take good care of them. For many, they are missing the communication link only.”

It’s about learning, and a small investment in the book “Yes, You Can Train Your Dog” will help people to change their attitudes about dogs. “The animal lover will receive 10 times more love from the dog when he understands them,” he adds.

So far, he has garnered some very uplifting reviews since the publication’s release in August. There is also a Mandarin edition, and currently, plans are afoot for a Japanese and a Korean edition to join the stable. “The responses received were heartfelt, and it pushed me on.

Sometime in the not too distant future, my idea is to get another book done. This time, a prequel to owing a dog,” says Eli with a feisty grin.

He’s clearly on a roll here. He is consistent in his message so far: Dogs are not just mere pets; they are indeed man’s best friend. And, they can play a more significant role in our lives, if so enabled. He talks about another project that’s close to his heart – therapy dogs for the elderly.

Eli recognises that Asia has a large ageing population and with younger family members at work, having a dog in the family, can be a boon for the seniors. “It’s not complicated, just let them take a walk with the dog – it keeps our senior folks healthier both physically and mentally.”

The role a dog can play in enriching our daily lives extends further, beyond pet ownership. Our faithful four-legged friends excel as working dogs. From guide dogs to those in the service, newer deployments in the medical arena are fast rising to the fore.

Reports and studies have shown that dogs can sniff out tumours, cancers, epilepsy, Alzheimer’s, and now – Coronavirus. Eli notes that select airports around the world have already been carrying out experiments, and the results so far have been pretty encouraging. Effort is required, but so is patience at this point.

Meanwhile, he and a company of like-minded individuals, are taking a closer look at the viability of such deployments.

Dogs have played a vital role in the lives of humans for more than 10,000 years, and they continue to do so today. With our faithful dogs taking a more prominent role in society, Eli’s optimistic that in the near future, there will be more dog-friendly places in Singapore. Not just for guide dogs, but for all dogs: “I hope dogs will be more welcomed in more places.”

From service and therapy dogs to family pets, dogs hold a special place in our hearts. For Eli, he is wearing his heart on his sleeve.