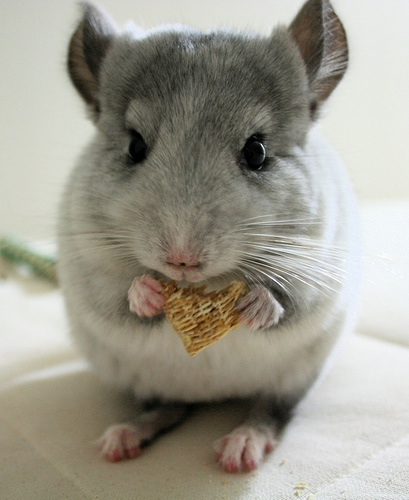 Fur Slip is the automatic release of patches of fur when a Chinchilla is caught or mishandled. This condition should not be mistaken for shedding, which is a natural process in Chinchillas.

Fur Slip is the automatic release of patches of fur when a Chinchilla is caught or mishandled. This condition should not be mistaken for shedding, which is a natural process in these rodents.

In their original habitat, Chinchillas use this defense mechanism against predators when caught. By suddenly releasing a clump of fur, it would have the chance to escape leaving the predator with nothing but a mouthful of fluff.

In captivity, frightened chinchillas fur slip in an attempt to escape if it is not used to being handled by humans or when roughly handled. Other common causes include the rodent knocking itself against something hard or a fight amongst chinchillas.

In captivity, a frightened Chinchilla fur slips in an attempt to escape from being handled roughly or by someone unfamiliar. Knocking itself against something hard or getting into fights with other chinchillas can also cause such a reaction.

To prevent Fur Slip from happening, never grab a Chinchilla unexpectedly and ensure that there is a bond of trust built up before trying to hold it. Always talk calmly whilst holding the rodent and offer a treat after the experience so it will associate being handled as pleasurable rather than frightening. Keep aggressive Chinchillas apart and ensure that there are no objects that the animal can collide with while running around.

Fur Slip does not pose any harm to a Chinchilla other then ruining the appearance of its coat, which grows back within approximately six months. However, Fur Slip should be avoided as it is generally a result of the animal being scared, mishandled, hurt or caught; all of which can be detrimental to a its health.