Rabbits, chinchillas, and guinea pigs should be offered free access to large quantities of fresh timothy hay daily (young animals may have some Alfalfa Hay). Similarly, other small pets, such as hamsters and gerbils, should be given a small handful of hay two or three times a week. 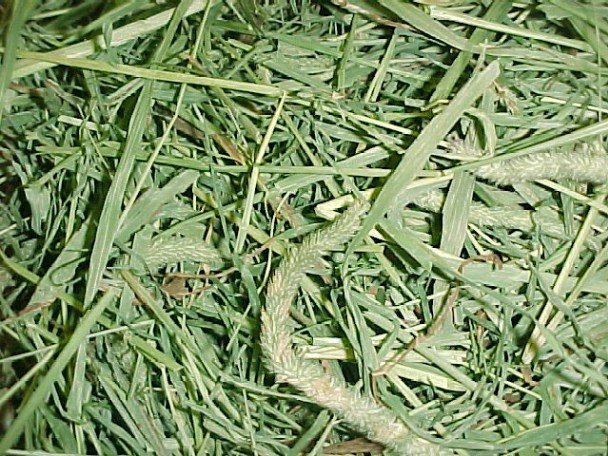 Dietary Benefits of Timothy Hay
Timothy Hay should be an integral part of many small pets' diets. Timothy Hay is very fibrous. Therefore, it is essential for the proper functioning of your small pet's digestive system. As the chewed hay moves through the small and large intestine, the high fiber content aids in the passage of food.

Dental Benefits of Timothy Hay
Timothy Hay should be the main food offered to your rabbit, chinchilla, or guinea pig. As your pet chews this herbivore-favorite food, it wears down and cleans their constantly growingcheek teeth, which are the large grinding teeth in the back of the mouth. To compensate for this wearing, cheek teeth have evolved to grow continuously throughout the animal's life. Therefore, keeping fresh Timothy Hay available to your rabbit or true herbivore small pet is essential to help wear down her teeth. Other chewing items such as chew sticks should also be provided.

The diet of mainly Timothy Hay should be supplemented with fresh vegetables, a small amount of pellets and, of course, fresh water.

As with most foods, no two hay types are identical in structure and nutrient content. This is especially true for Timothy Hay and Alfalfa Hay. Although both types of hay are frequently sold for small pets, each has its place in your pet's dietary needs and should not be substituted for one or another. Alfalfa Hay is rich in calories and calcium, while timothy hay is less-fattening and has much less calcium. Therefore, during the developmental stages of your rabbit's life or during her pregnancy, for example, Alfalfa Hay can be offered. But once a young animal reaches young adulthood (about 7 months of age in a rabbit), she should be switched to an almost strictly Timothy Hay diet, unless otherwise recommended by your veterinarian due to low body weight.

Because of its versatility as both a dietary food and dental aid, Timothy Hay is a great food source for many small pets.