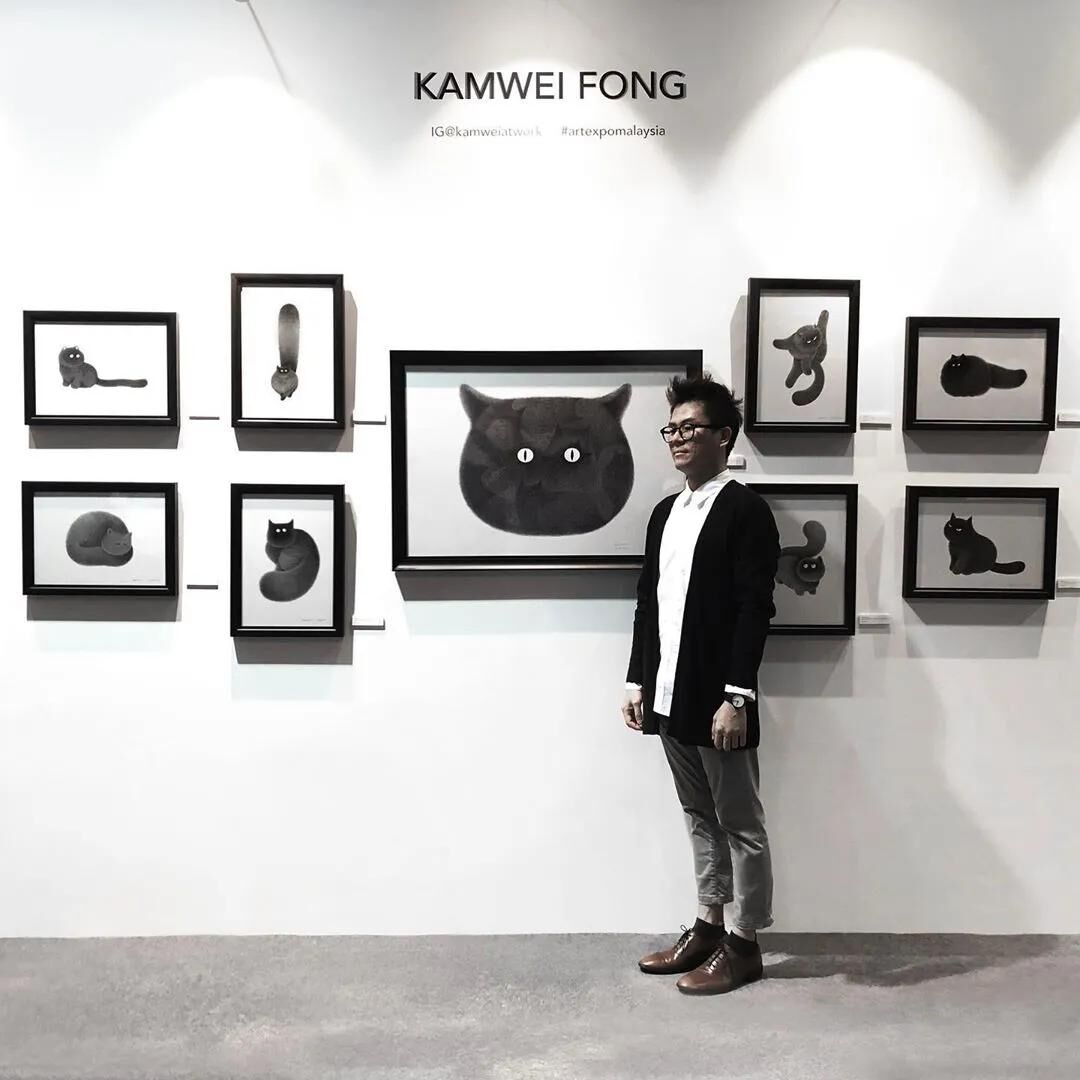 There's nothing more adorable than a fluffy cat. And these black and white balls of fur seen here can attest to just that.

Described as poetic, humourous, imaginative, and playful, the felines are fluffed and puffed into rotund balls sprouting equally puffed tails. Some look with curiosity or wariness at fish that dangle or waves that crash from it's own tail, while others are drowsy, peeved, and deep in slumber.

The Malaysian artist Kamwei Fong, 42, made a name for himself in the art world with his black and white rendition of cats – using only the 0.05pt and 0.1pt archival micro pigment ink fine line pens, and, loads of patience.

All hand-drawn, all with their own expressive personality, each of Kamwei's cats beguile in their own right. Without mouths, the character’s emotions are conveyed with expressive, bright eyes, alert ears, and big, bushy tails.

And, it's not just confined to felines: He dreams up similarly charming monkeys, goldfish, puppies, and other assorted animals in his furry utopia.

All hand-drawn, all with their own expressive personality, each of Kamwei’s cats beguile in their own right.

Based in Kuala Lumpur, his first piece in The Furry Thing series was created back in 2009. It became his initial calling card in the art world and had cat-loving people swooning over it. On Instagram alone, he gathered 197,000 followers for his black and white cats.

“All the kitties in The Furry Thing series have the same DNA: They’re quirky, funny, mysterious, sometimes angry and ridiculous.”  Kamwei adds: “I draw them by shading with tons of tiny furs." The time-consuming process sees an A3 sized cat drawing lapping up a few days of work. "Big ones like 25×37 inches could take a few weeks."

The lines are varied in size and density to slowly build volume and texture, resulting in a ‘furry’ look. And, it is these multiple layers of mini-strokes that create critters with their tactile and irresistible lightness.

It's obvious he likes felines as: “Cats are cool, mysterious creatures with strong characteristics, and my minimalist style cat drawings of mine which often without mouth, paws, nose, whiskers are my interpretation and imagination of them."

His felines, the bushy-tailed and paunchy Kitty No. 25 in particular, made an appearance in the Japanese clothing retail giant Uniqlo (for its feline-themed tee-shirt collection Cats are Purrfect.)

While the artist made his mark drawing cats, he describes himself as: “Definitely a dog person. Spiritually, I’m very close to these creatures.”

After spending two decades in the creative industry, he followed his heart and went on to a fulltime artist and illustrator in 2018.

As a child, Kamwei would spend time scribbling before going off to school – on bits of paper, walls and, much to his parent's chagrin, even household furniture.

Kamwei's mother, fortunately, was not distracted by the display of domestic vandalism from her 4-year-old. Instead, she got good quality art materials to channel his source of creativity. Sitting beside him every time he drew, she provided the foundation which turned into a lifelong pursuit for him.

From art classes in high school to a diploma in an art/design college, Kamwei went on to work in design consultancies and international advertising agencies.

After spending two decades in the creative industry as a consultant, branding and advertising designer in Petaling Jaya and Kuala Lumpur, he followed his heart and went on to become a full-time artist and illustrator in 2018.

His artwork has since garnered global recognition with exhibitions at Salon des Beaux Arts in Paris and Art Expo Malaysia in Kuala Lumpur. His original art pieces, prints, and ceramic sculptures can be found in Galerie Club Sensible in Paris, France; Mintprints in Taipei, Taiwan; Adaro Art Gallery, Florida, US.

His personal philosophy is that the things he has done today will lead him somewhere tomorrow. His creativity is best described as instinctive, striving to only do what he loves, and collaborating with companies and brands he finds interesting.

“Be happy. Be childlike. Be ridiculous” is his working mantra. Kamwei Fong sells signed print editions of his animal illustrations in his Etsy shop and partners with Galerie Club Sensible in Paris.