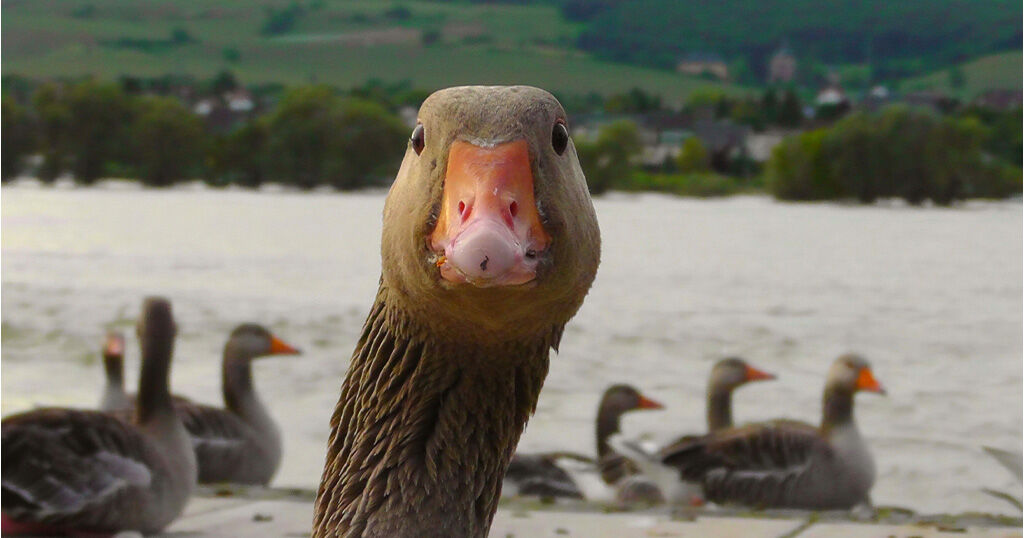 Geese guard squads are not new and these bossy birds have been used as guardian animals for centuries. In fact, several police stations located in rural areas of China’s Xinjiang have employed geese squads to help to ward off threats and guard their bureaus, according to a 2013 article by China Daily.

Since October 2021, the Chinese government has deployed a gaggle of about 500 geese across 300 miles of China’s Chongzuo Prefecture in an effort to stop the coronavirus from entering China via illegal immigration. Chinese domestic geese need no training; once they establish their territory, the five-pound birds defend it fiercely.

Reinforcing this geese guards are about 400 guard dogs, which accompany border police on patrol while the birds keep stationary watch. Together the interspecies team is key in maintaining China’s zero-COVID policy, which aims to eliminate the virus from within the country.

According to legend, Gallic troops tried to sneak up the hill during the night, but disturbed a sacred flock of geese that lived in the temple of Juno. Their honking was loud enough to alert the Roman guards, who threw the invaders off the holy hill.

In 390 B.C., two geese alerted Rome to an impending Gaul attack, potentially saving the city from destruction. For generations after, the event was commemorated by having a pampered goose watch the city’s treacherous guard dogs get crucified.

Geese are uniquely suited to the task. Not only are their pierc­ing honks excellent alarms, but they are instinctively protective and more naturally suited to guard work than humans, or even dogs.

If you walk onto a geese's turf, they will almost charge you, honk, and use intimidation tactics, versus running away like most birds.

As birds, geese see ultraviolet light, their vision is far superior to that of people. Their distance vision is remarkably good to spot possible predators, and they can sense movement long before an ordinary person can. While most birds don’t react to what they see in a way that is helpful to people, geese do. Geese sound off loudly and aggressively, ideal attributes for guarding.

Geese, especially male geese, are exceptionally territorial. While most domestic geese can still fly, they don’t. Once a location has been established as a home base, they’ll fight to the death to defend it from intruders. Geese are commonly used for flock defense for other poultry and from predators as big as coyotes.

Geese can be exceptionally loud. Once they’ve detected an intruder, there’s no stopping their alarm. Geese actually get louder when fed. Toss anything in their direction, and the moving object will only strengthen their alarm instinct.